Head of an Ox

3D
Scan The World
3,674 views 299 downloads
7 collections
Community Prints Add your picture
Be the first to share a picture of this printed object
0 comments

Head of an Ox

This head of an ox, carved in marble and resting on a wooden tree trunk, contains an unusual curiosity. In the centre of the ox's head is a cavity in which rests a 'stone' identified as an osteoma, a new piece of bone growing on another (typically a skull) which was originally thought to be the fossilised or petrified brain of an ox. This may have been based on an event in Padua in 1670, when a hardened mass of bone was discovered inside a slaughtered ox.
The discovery created a sensation, as it was believed that the brain of the animal had become petrified during its lifetime. In 1933, the Natural History Museum confirmed that the huge osteoma displayed here was organic and likely to be a piece of diseased bone from a large mammal, such as an elephant or whale.

The sculpture may once have belonged to the Querini family at the Villa Altichiero in Padua, although there is no firm documentary evidence. Its theatricality was typical of the seventeenth-century fascination with naturally occurring oddities, particularly within the context of the noble and scholarly collections, where artistic objects sat alongside the naturalia they sought to emulate. This unusual sculpture, with its varied textures and bizarre subject-matter, would have provided a dramatic talking point.

Scanned as part The Digital Design Weekend at The Victoria and Albert Museum, London. Visitors to the design festival were invited to share a photograph of this sculpture and contribute it to Scan the World. These photos were then processed to generate this 3D model! Many thanks to all who took part in helping to scan this work. 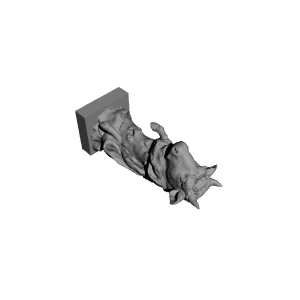