3D
360°
Scan The World
2,427 views 324 downloads
2 collections
Community Prints Add your picture
Be the first to share a picture of this printed object
0 comments

This larger than life head depicts the Roman god Apollo. It is a type defined as the Apollo of Kassel (also known as the Ephebe of Kassel), from a series of Roman copies of classical Greek sculpture. The original Roman copy of the now lost Greek original is housed in the Wilhelmshohe Castle Museum in Kassel.

The while marble statue dates back to the 2nd Century (presumably belonging to the emperor Domitian), the original Greek bronze is now lost. There are more than 20 known versions of this type, in addition to many other depictions on coins and gems.

Pausanias the Periegeta reports that on the Acropolis of Athens there was a statue in honour of Apollo created by the sculptor Phidias which showed the god as Parnopios (Lord of the Locusts), the full figure sculpture would have held a locust. Since the copies are familiar to the works present on the Parthenon Frieze, it was a natural assumption to identify the Apollo Kassel type with the lost statue. 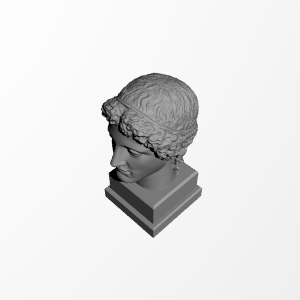