Head of Asclepius at The State Hermitage Museum, St Petersburg

3D
Scan The World
2,613 views 163 downloads
1 collection
Community Prints Add your picture
Be the first to share a picture of this printed object
0 comments

Head of Asclepius at The State Hermitage Museum, St Petersburg

Asclepius was a god of medicine in ancient Greek religion andmythology. Asclepius represents the healing aspect of the medical arts; his daughters are Hygieia ("Hygiene", the goddess/personification of health, cleanliness, and sanitation), Iaso (the goddess of recuperation from illness),Aceso (the goddess of the healing process), Aglæa/Ægle (the goddess of beauty, splendor, glory, magnificence, and adornment), and Panacea (the goddess of universal remedy). He was associated with the Roman/Etruscan god Vediovis and the Egyptian Imhotep. He was one of Apollo's sons, sharing with Apollo the epithet Paean ("the Healer"). The rod of Asclepius, a snake-entwined staff, remains a symbol of medicine today. Those physicians and attendants who served this god were known as theTherapeutae of Asclepius

Although there are some supports on the model, it is easy to clean and no risk to brake any part on the model when it is cleaning. If you print it big enough, cleaning process will be easier. Enjoy your print. 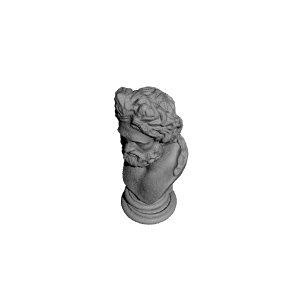 ×
1 collections where you can find Head of Asclepius at The State Hermitage Museum, St Petersburg by Scan The World