3D
Scan The World
6,197 views 187 downloads
3 collections
Community Prints Add your picture
Be the first to share a picture of this printed object
0 comments

Bust made of marble (probably Pentelic marble) of a young man with regular features, depicted with a taenia and small bull-like horns sticking out from his thick short curly hair which indicate a divine origin (Zeus – Amon-Ra). The expression, with its impression of inspiration conveyed by the gaze focused on the sky, recalls the iconographies of Hellenistic dynasties that emulated Alexander the Great. It has been compared to the bronze statuette from Herculaneum, now in the National Archaeological Museum of Naples (inv. 5026) and with numerous portraits on coins issued after 295 B.C., such as Demetrius I Poliorcetes, described by Philodemus in ‘The Mirror for Princes’; on the strength of these similarities, the bust has been identified as the “man who struts on account of his beauty”. De Petra suggests that the figure is Alexander the Great, while others (Hekler, Laurenzi and Richter) are more prudent, given the lack of a certain attribution, and prefer to stick to a more generalised identification of the figure as a “Hellenistic monarch”. It is probably a Roman copy of a portrait made by Teisikrates between 320 and 280 BC. 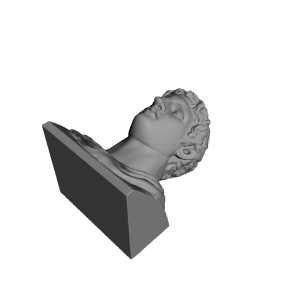