Head of the God Apollo ("Apollo of Antium")

3D
Scan The World
1,405 views 38 downloads
1 collection
Community Prints Add your picture
Be the first to share a picture of this printed object
0 comments

Head of the God Apollo ("Apollo of Antium")

Roman marble replica (AD 2nd c.) after a Greek original of the 4th c. B.

The Greeks had many epithets for him. Homer calls him a “devourer of mice” (smintheus), “hitter of distant targets”, and “he who rushes to the scene with loud war cries”. As Phoibos (“shining one”), he was sometimes identified with Helios, the god of the sun. He brought destruction and plague, but he could also liberate from danger. In addition to his dark sides, as the leader of the nine muses he is also the god of music and the arts.

Especially when they depict him as a musician, Greek artists tend to bring out an androgynous aspect of Apollo’s existence. Above the forehead of this striking head, the hair is piled up in a feminine hairstyle familiar to us from sculptures of Aphrodite. It is divided into two wide braids, casually tied together on top of the head. The sensuous expression is emphasised by the halfopen mouth, but also by the moving turn of the head.

From a copy of the statue now in the National Museum in Rome, we know that this figure of the god was depicted naked, leaning casually against a stele. 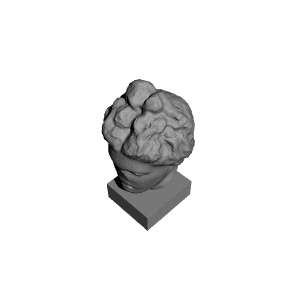