3D
Scan The World
2,744 views 225 downloads
1 collection
Community Prints Add your picture
Be the first to share a picture of this printed object
0 comments

This is a marble head-portrait of Thucydides (460-395), an Athenian military general and historian. Thucydides both fought in and wrote about the Peloponnesian War, a bitter conflict between the Greek city-states Athens and Sparta from 431-404 BC. His failure to defend the city of Amphipolis (in northern Greece) against the Spartans led to his twenty-year exile from Athens and political life. Thucydides was one of the first historians to attribute the causes of war to human affair rather than to an intervention of the gods, consulting eyewitnesses and written documents in his research. He seems to have died before completing his history as the last years of fighting are not included 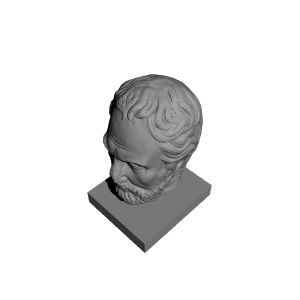