Head of Venus at The Réunion des Musées Nationaux, Paris

3D
Scan The World
4,784 views 178 downloads
Community Prints Add your picture
Be the first to share a picture of this printed object
0 comments

Head of Venus at The Réunion des Musées Nationaux, Paris

Venus is the Roman goddesswhose functions encompassed love, beauty, sex, fertility, prosperity and desire. In Roman mythology, she was the mother of the Roman people through her son, Aeneas, who survived thefall of Troy and fled to Italy. Julius Caesar claimed her as his ancestor. Venus was central to many religious festivals, and was revered in Roman religion under numerous cult titles. The Romans adapted the myths and iconography of her Greek counterpart Aphrodite for Roman art and Latin literature. In the later classical tradition of the West, Venus becomes one of the most widely referenced deities of Greco-Roman mythology as the embodiment of love and sexuality. Venus embodies sex, love, beauty, enticement, seduction, and persuasive female charm among the community of immortal gods; in Latin orthography, her name is indistinguishable from the Latin noun venus ("sexual love" and "sexual desire"), from which it derives. Venus has been described as perhaps "the most original creation of the Roman pantheon", and "an ill-defined and assimilative" native goddess, combined "with a strange and exotic Aphrodite".Her cults may represent the religiously legitimate charm and seduction of the divine by mortals, in contrast to the formal, contractual relations between most members of Rome's official pantheon and the state, and the unofficial, illicit manipulation of divine forces through magic. The ambivalence of her function is suggested in the etymological relationship of the root*venes- with Latin venenum (poison), in the sense of "a charm, magic philtre".

In myth, Venus-Aphrodite was born of sea-foam. Roman theology presents Venus as the yielding, watery female principle, essential to the generation and balance of life. Her male counterparts in the Roman pantheon, Vulcan and Mars, are active and fiery. Venus absorbs and tempers the male essence, uniting the opposites of male and female in mutual affection. She is essentially assimilative and benign, and embraces several otherwise quite disparate functions. She can give military victory, sexual success, good fortune and prosperity. In one context, she is a goddess of prostitutes; in another, she turns the hearts of men and women from sexual vice to virtue. Images of Venus have been found in domestic murals, mosaics and household shrines. Petronius, in his Satyricon, places an image of Venus among the Lares (household gods) of the freedman Trimalchio's lararium. Prospective brides offered Venus a gift "before the wedding"; the nature of the gift, and its timing, are unknown. Some Roman sources say that girls who come of age offer their toys to Venus; it is unclear where the offering is made, and others say this gift is to the Lares. In dice-games, a popular pastime among Romans of all classes, the luckiest, best possible roll was known as "Venus".

Printed by PRINT3Dforum.com Printing Services - Support required. Other than that, pretty straightforward print. 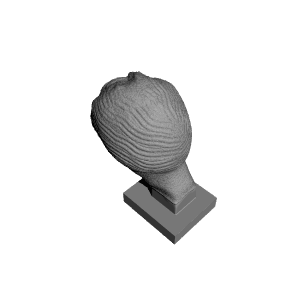 ×
0 collections where you can find Head of Venus at The Réunion des Musées Nationaux, Paris by RMN