3D
Scan The World
3,184 views 188 downloads
1 collection
Community Prints Add your picture
Be the first to share a picture of this printed object
0 comments

This head, with its so-called “lead eyes”, takes its name from the metal with which the eyes were originally inlaid, and which today has disappeared. It is emblematic of his work of the post-war years. With this austere-looking head, Zadkine pushes stylization of form to its extremes. Simplification of planes. The removal of certain details and disproportionality of those retained (the protuberance of the skull which has turned into a helmet, the elongation of the bridge of the nose, the flattening of the face, the geometrization of the eyebrow arch and the exaggeration of the naso-labial fold). Here, Zadkine's art is very close to that of Modigliani. The two artists knew each other well. It is not an art of mimesis based on the imitation of nature, but on the free reconstruction of form, of invention. 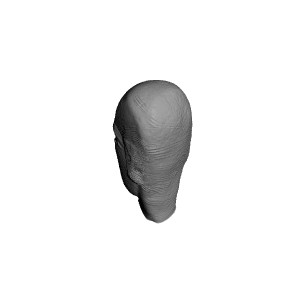 ×
1 collections where you can find Head with lead eyes at Musée Zadkine, Paris, France by Scan The World