Hekate, Goddess of the Underworld

3D
Scan The World
1,912 views 116 downloads
Community Prints Add your picture
Be the first to share a picture of this printed object
0 comments

Hekate, Goddess of the Underworld

This black-glazed oinoche (jug) has relief decoration showing Hekate holding two torches and dancing in front of an altar, beyond which is a cult statue. Her whole figure and face was once covered with gold foil; her small floating cloak was red. On the neck is a wreath of laurel with additional festoons.

Hekate is a goddess in Ancient Greek religion and mythology, most often shown holding two torches or a key and in later periods depicted in triple form. She was variously associated with crossroads, entrance-ways, light, magic, witchcraft, knowledge of herbs and poisonous plants, ghosts, necromancy, and sorcery. She appears in the Homeric Hymn to Demeter and in Hesiod's Theogony, where she is promoted strongly as a great goddess. The place of origin of her following is uncertain, but it is thought that she had popular followings in Thrace.She was one of the main deities worshiped in Athenian households as a protective goddess and one who bestowed prosperity and daily blessings on the family. In the post-Christian writings of the Chaldean Oracles (2nd–3rd century CE) she was regarded with (some) rulership over earth, sea and sky, as well as a more universal role as Saviour (Soteira), Mother of Angels and the Cosmic World Soul. Regarding the nature of her cult, it has been remarked, "she is more at home on the fringes than in the center of Greek polytheism. Intrinsically ambivalent and polymorphous, she straddles conventional boundaries and eludes definition." 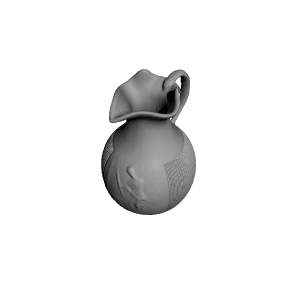 ×
0 collections where you can find Hekate, Goddess of the Underworld by Scan The World