3D
Scan The World
2,958 views 268 downloads
Community Prints Add your picture
Be the first to share a picture of this printed object
0 comments

In Cypriot sculpture, a pursely Greek style only became common from around 350 BC, accelerated by Alexander the Great's conquest in 333 BC. However, a late Classical Greek style continued to be used until around 200 BC, often making it difficult to date statues precisely. This male dead is among the earliest in the local Hellenistic tradition. The wreath thows that the man depicted is a worshipper. Although realistic, this bust may not be a portrait of an actual person.

From All Dali. Sanctuary of Apollo-Reshef.

The Hellenistic period covers the period of ancient Greek (Hellenic) history and Mediterranean history between the death of Alexander the Great in 323 BC and the emergence of the Roman Empire as signified by the Battle of Actium in 31 BC and the subsequent conquest of Ptolemaic Egypt the following year.

Hellenistic art saw a turn from the idealistic, perfected, calm and composed figures of classical Greek art to a style dominated by realism and the depiction of emotion (pathos) and character (ethos). The motif of deceptively realistic naturalism in art (aletheia) is reflected in stories such as that of the painter Zeuxis, who was said to have painted grapes that seemed so real that birds came and pecked at them. The female nude also became more popular as epitomized by the Aphrodite of Cnidos of Praxiteles and art in general became more erotic (e.g. Leda and the Swan and Scopa's Pothos). The dominant ideals of Hellenistic art were those of sensuality and passion.

People of all ages and social statuses were depicted in the art of the Hellenistic age. Artists such as Peiraikos chose mundane and lower class subjects for his paintings. According to Pliny, "He painted barbers' shops, cobblers' stalls, asses, eatables and similar subjects, earning for himself the name of rhyparographos [painter of dirt/low things]. In these subjects he could give consummate pleasure, selling them for more than other artists received for their large pictures". Even barbarians, such as the Galatians, were depicted in heroic form, prefiguring the artistic theme of the noble savage. The image of Alexander the Great was also an important artistic theme, and all of the diadochi had themselves depicted imitating Alexander's youthful look. A number of the best-known works of Greek sculpture belong to the Hellenistic period, including Laocoön and his Sons, Venus de Milo, and the Winged Victory of Samothrace. 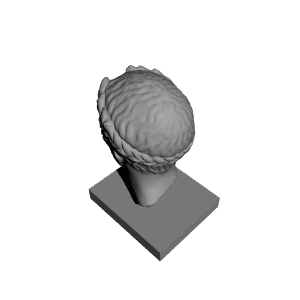 ×
0 collections where you can find Hellenistic Male Head 1 at The British Museum, London by Scan The World