3D
Scan The World
9,244 views 1,116 downloads
5 collections
Community Prints Add your picture
Be the first to share a picture of this printed object
0 comments

The fat, smiling monk udai is a popular figure in Chinese Buddhism. His character is an accumulation for several Chinese legends. Sculptures of Budai are frequently placed in the entrance halls to temples and monasteries, surrounded by the Good and Bad Boys. These two appear as officials or judges, recorders of a person's good and evil deeds during life, who decide whether to send a person to heaven or hell.

This Budai is glazed in the sancai (three colours) palette developed in the Tang dynasty, and which re-appeared in the Mind. An inscription on the left side dates it to 1486, the twentieth year in the reign of Cheghua. While many large, popular fgures like this were commissioned for religious reasons, the majority of imperial Chenghua ceramics were delicately formed and coloured porcelains.

This object is part of "Scan The World". Scan the World is a non-profit initiative introduced by MyMiniFactory, through which we are creating a digital archive of fully 3D printable sculptures, artworks and landmarks from across the globe for the public to access for free. Scan the World is an open source, community effort, if you have interesting items around you and would like to contribute, email stw@myminifactory.com to find out how you can help.
Show more Show less
License
Printing Details 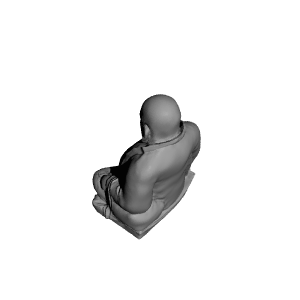 ×
5 collections where you can find Henan Budai Buddha, British Museum by Scan The World