3D
360°
Featured Scan The World
2,819 views 347 downloads
3 collections
Community Prints Add your picture
Be the first to share a picture of this printed object
0 comments

This bust of Henrietta Pelham forms a pair with that of her husband Charles (Msueum no. A.119-1929), whom she married in 1806. Both busts stand on their original wood plinths. A variant dated 1808 is at Brocklesby Park, Lincolnshire, the ancestral home of the Yaboroughs. The present bust may have been shown at The Royal Academy in 1810.

Object history note
From the collection of Lord Yarborough. Sold together with seventeen other portrait busts by Nollekens at Christie's, 11th July 1929, lot 160; purchased by Messrs Alfred Spero and Kerin Ltd, 9 Clifford Street, New Bond Street, London for £37 16s. Purchased by the Museum with its contemporary pedestal from Messrs Alfred Spero and Kerin Ltd in 1929 for £37 16s. 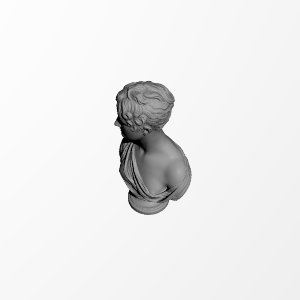 ×
3 collections where you can find Henrietta Pelham by vam