3D
360°
Featured Scan The World
2,499 views 185 downloads
Community Prints Add your picture
Be the first to share a picture of this printed object
0 comments

Henrik Henriksen (1715-80), as he was originally called, was the son of a wealthy merchant. He trained in the fields of theology and law. From 1740-42 he undertook a Grand Tour of Europe, in the course of which he established contact with scholars and forged influential diplomatic connections. He was ennobled in 1747 after which he adopted the name of Hielmstierne. He acted as a high court judge, a privy counsellor and the president of the Royal Danish Academy of Sciences and Letters. Hielmstierne was particularly interested in history and literature. His collection of books today constitutes one of the most outstanding specialist collections in the Royal Library.

Modelled after a plaster cast of a bust by Hartman Beeken and J.L. Lund's drawing Inv.no. D1581 after Jens Juel's painting 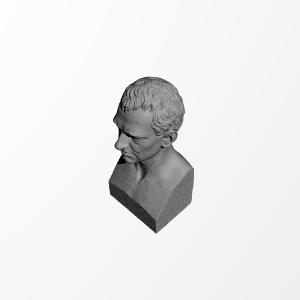 ×
0 collections where you can find Henrik Hielmstierne by Thorvaldsen