Heracles stealing the apples of the Hesperides

3D
Scan The World
2,087 views 79 downloads
1 collection
Community Prints Add your picture
Be the first to share a picture of this printed object
0 comments

Heracles stealing the apples of the Hesperides

Although we do not have much information about this relief from the Doria Pamphilj Palazzo, we may suggest it is a representation of the Eleventh Labour of Heracles, as he steels the golden apples from the Hesperides. Indeed, the tree and the bag of fruits the man is carrying are good indicators of this episode, where Heracles had to take the magical fruits from the Hesperides, also called "the Nymphs of the Evening".

We may suppose it belongs to the early Classical Greek period, or maybe the late Archaic period, as it seems to be quite in-between both. The nude body, the refined definition of the hair and beard would lead us towards the Classical period, whereas the still thick aspect of the tree and of the character's lower body would argue in favour of the Archaic period. 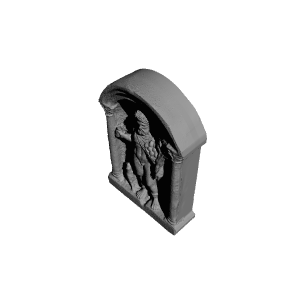