3D
Support Free Scan The World
2,712 views 92 downloads
Community Prints Add your picture
Be the first to share a picture of this printed object
0 comments

In Greek mythology, Auge a daughter of Aleus and Neaera and priestess of Athena Alea at Tegea, bore the hero Telephus to Heracles. Her father had been told by an oracle that he would be overthrown by his grandson. She secreted the baby in the temple of Athena. A scarcity of grain alerted Aleus that there was a profanation of the temple, and he discovered the child.

Hercules is the Roman name for the Greek divine hero Heracles, who was the son of Zeus (Roman equivalent Jupiter) and the mortal Alcmene. In classical mythology, Hercules is famous for his strength and for his numerous far-ranging adventuresThe Romans adapted the Greek hero's iconography and myths for their literature and art under the name Hercules. In later Western art and literature and in popular culture, Hercules is more commonly used than Heracles as the name of the hero. Hercules was a multifaceted figure with contradictory characteristics, which enabled later artists and writers to pick and choose how to represent him. This article provides an introduction to representations of Hercules in the later tradition. 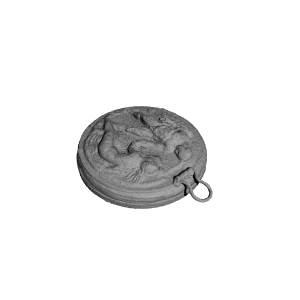 ×
0 collections where you can find Hercules Abducting Auge at The British Museum, London by Scan The World