3D
Scan The World
1,630 views 53 downloads
1 collection
Community Prints Add your picture
Be the first to share a picture of this printed object
0 comments

Cacus lived in a cave in Italy on the future site of Rome. To the horror of nearby inhabitants, Cacus lived on human flesh and would nail the heads of victims to the doors of his cave. He was eventually overcome by Hercules.

According to Evander, Hercules stopped to pasture the cattle he had stolen from Geryon near Cacus' lair. As Hercules slept, the monster took a liking to the cattle and slyly stole eight of them - four bulls and four cows - by dragging them by their tails, so as to leave a trail in the wrong direction. When Hercules awoke and made to leave, the remaining herd made plaintive noises towards the cave, and a single cow lowed in reply.

Angered, Hercules stormed towards the cave. A terrified Cacus blocked the entrance with a vast, immoveable boulder, forcing Hercules to tear at the top of the mountain to reach his adversary. Cacus attacked Hercules by spewing fire and smoke, while Hercules responded with tree branches and rocks the size of millstones. Eventually losing patience, Hercules leapt into the cave, aiming for the area where the smoke was heaviest. Hercules grabbed Cacus and strangled the monster, and was praised throughout the land for his act. According to Virgil in Book VIII of the Aeneid, Hercules grasped Cacus so tightly that Cacus' eyes popped out and there was no blood left in his throat. 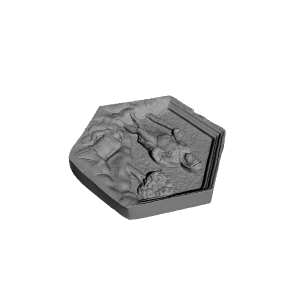