Hercules and Omphale at The Fine Art Museum in Brussels, Belgium

3D
Scan The World
3,087 views 241 downloads
2 collections
Community Prints Add your picture
Be the first to share a picture of this printed object
0 comments

Hercules and Omphale at The Fine Art Museum in Brussels, Belgium

In one of many Greek variations on the theme of penalty for "inadvertent" murder, for his murder of Iphitus, the great hero Heracles, whom the Romans identified as Hercules, was, by the command of the Delphic Oracle Xenoclea, remanded as a slave to Omphale for the period of a year, the compensation to be paid to Eurytus, who refused it. The theme, inherently a comic inversion of sexual roles, is not fully illustrated in any surviving text from Classical Greece. Plutarch, in his vita of Pericles, 24, mentions lost comedies of Kratinos and Eupolis, which alluded to the contemporary capacity of Aspasia in the household of Pericles, and to Sophocles in The Trachiniae  it was shameful for Heracles to serve an Oriental woman in this fashion, but there are many late Hellenistic and Roman references in texts and art to Heracles being forced to do women's work and even wear women's clothing and hold a basket of wool while Omphale and her maidens did their spinning. Omphale even wore the skin of the Nemean Lion and carried Heracles' olive-wood club. Unfortunately no full early account survives, to supplement the later vase-paintings.But it was also during his stay in Lydia that Heracles captured the city of the Itones and enslaved them, killed Syleus who forced passersby to hoe his vineyard, and captured the Cercopes. He buried the body of Icarus and took part in the Calydonian Boar Hunt and the Argonautica. After some time, Omphale freed Heracles and took him as her husband. They travelled to the grove of Bacchus and planned to celebrate the rites of Bacchus at dawn. Hercules slept alone in a bed covered with the clothes of Omphale. The Roman god Faunus hoped to have his way with Omphale and crept naked into the bed of Hercules who threw Faunus to the floor and laughed. 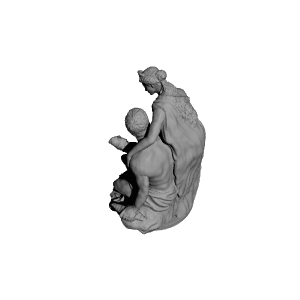 ×
2 collections where you can find Hercules and Omphale at The Fine Art Museum in Brussels, Belgium by Scan The World