3D
Scan The World
2,355 views 84 downloads
2 collections
Community Prints Add your picture
Be the first to share a picture of this printed object
0 comments

The god, portrayed with his head covered by the petasos (winged hat) and the caduceus (messenger's staff) in his left hand, must have extended his right arm (now missing) forwards. The model on which the statue is based and of which other Roman copies are known, is attributed to a Greek, probably Attic, master active in around the mid-5th century BC.

The Hermes Ludovisi, also formerly known as Mercurio Oratore ("Mercury the Orator"), is a Hellenistic sculpture of the god Hermes in his form of Hermes Psychopompus. It is made of Italic marble and is a somewhat slick 1st-century AD Roman copy after an inferred bronze original of the 5th century BC which is traditionally attributed to the young Phidias, ca 440 BC. or alternatively called "Myronic". Its model is among the earliest sculptural representations of Hermes as beardless and youthful. It was acquired by Cardinal Ludovico Ludovisi for the Ludovisi collection and is now on show at the Palazzo Altemps.

A variant on a somewhat reduced scale, found in Anzio, is conserved in the Museo Nazionale Romano, Palazzo Massimo alle Terme. As in other free Roman-era copies, there are variations in the shaping of the soft-brimmed petasos Hermes wears and the angle of the kerykeion in his left hand. 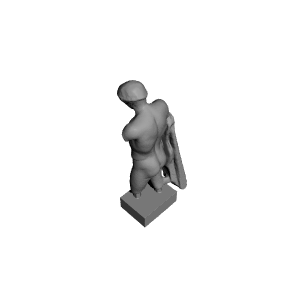