3D
Scan The World
1,963 views 64 downloads
5 collections
Community Prints Add your picture
Be the first to share a picture of this printed object
0 comments

The earliest money in China was shaped like tools, including spades and knives. These forms were possible because coins were cast in moulds. Spade money reflected the shape of real agricultural tools, with the hollow handle originally being the socket for a wooden handle. These spades were made to standard sizes for use as money. During the Warring States period (475-221 BC), the various states used different forms of spade money. There were several weight systems which were reflected on the inscriptions on the currency.

Jin  was a majorstate during the middle part of the Zhou dynasty, based near the center of what was then China, on the lands attributed to the legendary Xia dynasty: the southern part of modern Shanxi. Although it grew in power during the Spring and Autumn period, its aristocratic structure saw it break apart when the duke lost power to his nobles. In 453 BCE, Jin was split into three successor states: Han, Zhao and Wei. The Partition of Jin marks the end of the Spring and Autumn Period and the beginning of the Warring States period. 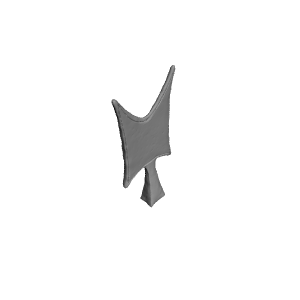 ×
5 collections where you can find Hollow-handled spade-money (1a) at The British Museum, London by Scan The World