Homage to Brancusi in Caransebes, Romania

3D
Scan The World
2,614 views 143 downloads
Community Prints Add your picture
Be the first to share a picture of this printed object
0 comments

Homage to Brancusi in Caransebes, Romania

Schlomo Katz is an Israeli artist and sculptor. His work is part of the International Sculpture Symposium in Caransebes, Romania. The piece is a tribute to Constantin Brancusi. Constantin Brâncuși  (February 19, 1876 – March 16, 1957) was a Romanian sculptor, painter and photographer who made his career in France. Considered a pioneer of modernism, one of the most influential sculptors of the 20th-century, Brâncuși is called the patriarch of modern sculpture. As a child he displayed an aptitude for carving wooden farm tools. Formal studies took him first to Bucharest, then to Munich, then to the École des Beaux-Arts in Paris from 1905 to 1907. His art emphasizes clean geometrical lines that balance forms inherent in his materials with the symbolic allusions of representational art. Brâncuși sought inspiration in non-European cultures as a source of primitive exoticism, as did Paul Gauguin, Pablo Picasso, André Derain and others. But other influences emerge from Romanian folk art traceable through Byzantine and Dionysian traditions.

There are some supports, but it is easy to clean and there is no risk to brake model. Enjoy your print. 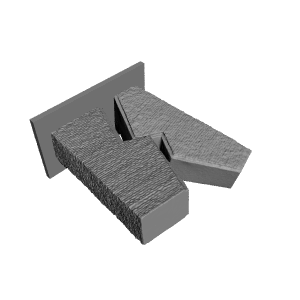 ×
0 collections where you can find Homage to Brancusi in Caransebes, Romania by apllana