This bust is a plaster cast of Greek author, Homer. UPDATE: The stand is much thicker than in the images.

The Trojan War is estimated to have begun in either the 12th or 13th Century BC and is one of the most important events to happen in Greek mythology. It was sparked when Paris of Troy took Helen from her husband, Menelaus (King of Sparta) and ended in April 1184 BCE when the city of Troy were defeated by Greek armies. There have been many literature works that narrate the war, but the works known as Iliad and Odyssey by Homer from his 24 books are the most notable to date, making his work of great significance to Greek history and culture.

Iliad comes before Odyssey and focuses on the Greek warrior Achilles during the Trojan War. Achilles was the son of the mortal Peleus (King of the Myrmidons), and the sea nymph, Thetis. Although Iliad covers only a few weeks in the final year of the war, it suggests that many of the Greek legends about it are true. Odyssey comes after Iliad and recounts the heroic deeds of Odysseus (King of Ithaca) who wanders for 10 years trying to find his way home after the Trojan War although the poem only covers the last six weeks.

If you print upright make sure you have a support for the chin and other parts of the model as the printer can not print on air - it needs something solid to print on that can be snapped off after. 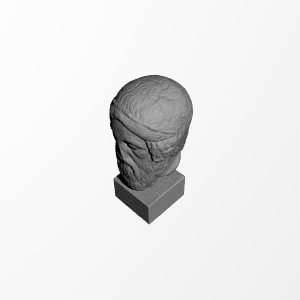 ×
4 collections where you can find Homer by SMK - Statens Museum for Kunst
×
Paris
@Paris3DArt
0
Printed on: Anycubic i3 Mega
Material: PLA
Posted at: 09th October 2019

Print took about 8 hours. When print is finished be careful of the stand/pole as it’s fragile. Also make sure you print with a support for the chin (unlike me). If stand happens to break, no worries clip it off and glue it - still looks just as good!