3D
Scan The World
1,575 views 51 downloads
Community Prints Add your picture
Be the first to share a picture of this printed object
0 comments

The inscription reads: " This tower was completed in 1443 under the worthy administrator Borvelis De Grimaldi".

This panel comes from the Arap Mosque in Istanbul. The building was originally a Roman Catholic church erected in 1325 by the friars of the Dominican Order. Although the structure was altered during the Ottoman period, it is the only example of medieval religious Gothic Architecture remaining in Istanbul.

The church was converted into a mosque by the Ottomans between 1475 and 1478, during the reign of Sultan Mehmed II, and became known as the Galata Mosque. It was later given by Sultan Bayezid II to Muslim Arab refugees from Al-Andalus who escaped the Spanish Inquisition in 1492 and settled in the Galata neighbourhood of Istanbul (hence its current name, Arab Mosque.) 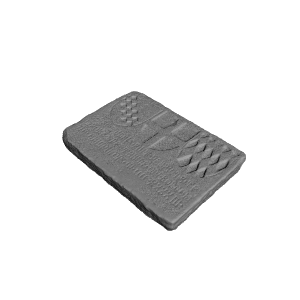