3D
Scan The World
1,679 views 81 downloads
Community Prints Add your picture
Be the first to share a picture of this printed object
0 comments

This is an abstract modern Iris was the goddess of the rainbow and the messenger of the Olympian gods. She was often described as the handmaiden and personal messenger of Hera. Iris was a goddess of sea and sky--her father Thaumas "the wondrous" was a marine-god, and her mother Elektra "the amber" a cloud-nymph. For the coastal-dwelling Greeks, the rainbow's arc was most often seen spanning the distance between cloud and sea, and so the goddess was believed to replenish the rain-clouds with water from the sea. Iris had no distinctive mythology of her own. In myth, she appears only as an errand-running messenger and was usually described as a virgin goddess. Her name contains a double meaning, being connected with both the Greek word iris "the rainbow" and eiris "messenger."

Iris is depicted in ancient Greek vase painting as a beautiful young woman with golden wings, a herald's rod (kerykeion), and sometimes a water-pitcher (oinochoe) in her hand. She was usually depicted standing beside Zeus or Hera, sometimes serving nectar from her jug. As cup-bearer of the gods, Iris is often indistinguishable from Hebe in art. 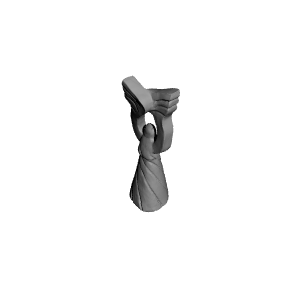