3D
Scan The World
1,913 views 110 downloads
Community Prints Add your picture
Be the first to share a picture of this printed object
0 comments

This is a depiction of a luohan in a rarely used material of cast iron, believed to have been created aroudn 1504 in the Ming dynasty. In portraying Luohans (holy monks), chinese sculptors enjoyed a certain freedom of expression. Conventions were not as strict as for the depiction of buddhas or bodhisattvas. Sculptors took delight in giving each luohan an individual expression, at times even approaching caricature.

Cast iron sculpture - very rare in the West before the 19th cenutry - was common in China from the eighth century onwards. The iron object was often embellished with a layer of gold lacquer. 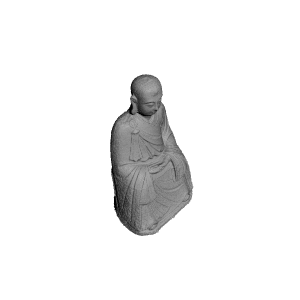 ×
0 collections where you can find Iron Luohan at The Royal Ontario Museum, Ontario by Scan The World