3D
Support Free Scan The World
4,431 views 119 downloads
Community Prints Add your picture
Be the first to share a picture of this printed object
0 comments

Iron:Man is a statue by Antony Gormley, in Victoria Square, Birmingham, England. The statue is 6 metres (20 ft) tall, including the feet which are buried beneath the pavement, and weighs 6 metric tons (6 long tons). The statue leans 7.5° backwards and 5° to its left. It is said by the sculptor to represent the traditional skills of Birmingham and the Black Country practised during the Industrial Revolution.

Cast at Bradley and Fosters Castings (now Firth Rixson Castings) in Willenhall, it was erected in 1993 and was a gift to the City from the Trustee Savings Bank, being erected outside the former Head Post Office, which was then their headquarters. It was originally named Untitled, but gained the nickname Iron Man, which Gormley requested be changed to Iron:Man and become the official name for it.

It was controversial initially, with early accusations of rusting being disproved by Gormley when he stated that the type of iron used encourages oxidation to protect the metal. There were rumours that when Diana, Princess of Wales, came to officially reopen Victoria Square in 1994, the statue was hidden from her view. When the bank relocated its headquarters to Bristol, some in Birmingham at the time felt the statue should be relocated or removed although, as it was originally a gift to the city, it was left in place. 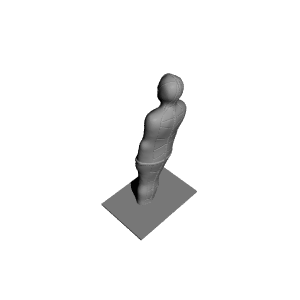