3D
Scan The World
2,986 views 120 downloads
Community Prints Add your picture
Be the first to share a picture of this printed object
0 comments

This full figure has been recognised as Iulia, daughter of Titus (79-81AD).She has a curly hairstyle with a frontal toupet typical of the Flavian age.

Julia Flavia (64 – 91 AD) was the daughter and only child to Emperor Titus from his second marriage to the well-connected Marcia Fumilla. Her parents divorced when Julia was an infant, due to her mother's family being connected to the opponents of Roman Emperor Nero. In 65, after the failure of the Pisonian conspiracy , the family of Marcia Furnilla was disfavored by Nero. Julia's father, Titus considered that he didn't want to be connected with any potential plotters and ended his marriage to Marcia Furnilla. Julia was raised by her father. Julia had been born in Rome and Titus conquered Jerusalem on Julia's sixth birthday. 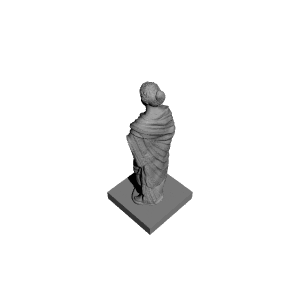