This carved piece, dating from c.1200, depicts a scene from the life of St Thomas à Becket. It shows the four knights (Reginald Fitzurse, Hugh de Moreville, William de Tracey, and Richard le Breton) who were involved in the murder in 1170 of Becket in Canterbury Cathedral following a dispute with King Henry II. One knight holds an axe with which to break down the door of the Cathedral. There are two tonsured figures in the centre; the hole between them may have held a cross. The three figures to the front include an archbishop (or bishop) holding a staff and two clergymen. ?English. 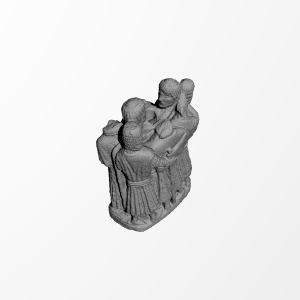