3D
360°
Featured Scan The World
2,704 views 233 downloads
1 collection
Community Prints Add your picture
Be the first to share a picture of this printed object
0 comments

Bertel Thorvaldsen created this bust of the Norwegian romanticist painter J.C. Dahl in 1821 whilst in Rome.

Johan Christian Claussen Dahl (1788-1857) was considered the first great romantic painter in Norway, the founder of the "golden age" of Norwegian painting, and, by some, one of the greatest European artists of all time. He is often described as "the father of Norwegian lanscape painting" and is regarded as the first Norwegian painter to ever reach a level or artistic accomplishment comparable to that attained by the greatest European artists of his day. He was also the first to acquire genuine fame and cultural renown abroad. As one critic has put it, "J.C. Dahl occupies a central position in Norwegian artistic life of the first half of the 19th century. 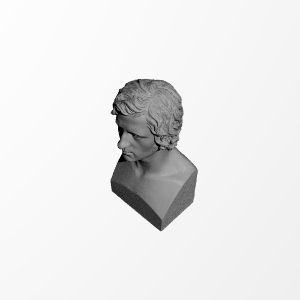 ×
1 collections where you can find J. C. Dahl by Thorvaldsen