3D
Support Free Scan The World
2,739 views 95 downloads
4 collections
Community Prints Add your picture
Be the first to share a picture of this printed object
0 comments

Perforators may have been used by the Olmec in bloodletting rites assoiated with royal accession. Although no direct representation of these rites is found in Olmec art, bloodletting forms a central theme in the scenes depicting Mayan accession rituals (see Yaxchilan lintels). The pair of motifs on the head of this instrument are linked to a supernatural fish being, and may allude to the marine source of other widely used perforators such as stingray spines and sharks' teeth. The size of this object and the fact that it is made of jade suggest that it served a largely symbolic function. It would have formed part of the ritual regalia and visual vocabulary of motifs which were the prerogative of the ruling Olmec elite.

Bloodletting is the ritualised self cutting of a soft body part using a sharp object such as a stingray, barbed wire or bird beak. The flood drops are then collected on paper and burnt as an offering to the god in return for favours. Blood cut from the tongue is used for accession ceremonies and blood from genitals for fertility. Usually these were done by the royal king and queen to get the maximum effect. They were also buried with the blood letting paraphernalia should they need it after their death.

Easy print, no supports and is recommended to print vertically and slowly. Printed by garagedays3d.com Printing Services. 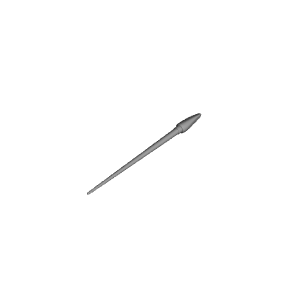 ×
4 collections where you can find Jade Perforator at The British Museum, London by Scan The World