3D
360°
Scan The World
1,776 views 174 downloads
2 collections
Community Prints Add your picture
Be the first to share a picture of this printed object
0 comments

This is a marble bust sculpture depicting a young lady Jessica. In Shakespeare’s play The Merchant of Venice, Jessica is the daughter of Shylock, a Jew who lends money to a Christian merchant, Antonio. The plot thickens when Antonio fails to repay Shylock, and the moneylender is ruined. This drama may have appealed to Moses Ezekiel because of its sympathetic portrayal of Jews. As an American Jew living in Italy, Ezekiel may have identified with Shylock, who was forbidden citizenship in Venice because of his faith. Ezekiel’s Jessica turns her head as if to say, “I am never merry when I hear sweet music,” a line from the play that the sculptor inscribed on the base of the bust. 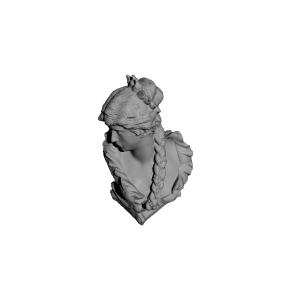 ×
2 collections where you can find Jessica by Scan The World