From Marvel:
William "Billy" Russo is a former Special Forces Marine who had become a close friend of Frank Castle. Russo became a part of Cerberus Squadunder William Rawlins' leadership, assisting in assassinations of high value targets. Upon leaving the Marines, Russo was funded by Rawlins and became the founder and CEO of Anvil Securities, training up soldiers for Rawlins' needs. Learning of Castle's return as the Punisher, Russo was recruited by Rawlins to assassinate his former friend, using Dinah Madani to learn of Castle's whereabouts which eventually exposed his own involvement in Cerberus. Fearing he would soon be used as a scapegoat and blamed for all the crimes, Russo betrayed Rawlins, allowing Castle to kill him, before Russo had a furious showdown with Castle, that led to Russo's handsome face being disfigured.

This mask is difficult to print in one piece vertically, you will need to apply a good number of supports to help support it on the print bed. You might want to try slicing a part of the mask off to be able to print it in two parts flat on a print bed. 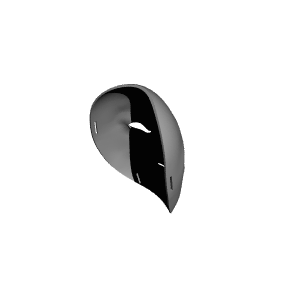 ×
6 collections where you can find Jigsaw's mask - The Punisher by Wekster
×
kikast3r
@Detail Art Factory
3
Printed on: Prusa i3 MK3
Material: PLA
Posted at: 19th May 2022

Billy, is that you?