3D
Scan The World
2,573 views 162 downloads
Community Prints Add your picture
Be the first to share a picture of this printed object
0 comments

Qingbai (bluish-white) refers to a variety of thin and often translucent porceleins with a transparent blue-tinged glaze, which are also called yingqing (shadow-blue) wares. The finest qinbai wares come from Jingdezhen in Jiangxi province and are the predercessors of blue-and-white porcelain. In spite of their quality they never enjoyed great prestige at court. Much of Qingbai ware was used by commoners, which was unusual during this period, as most pottery from this era was strictly for imperial use.

Qingbai ware is not considered to be part of the wu wei ce, or five classic wares of the Song Dynasty. Ding ware is an off-white porcelain; Qingbai ware is Ding ware that has achieved true translucency, and has a pure white porcelain body with a bluish-green glaze. Makers of Qingbai ware achieved this translucency by using kaolin and a fine-grained porcelain stone that supported thin-walled vessels. Kaolin, one of the most common clay minerals, gives the porcelain the true white color and allows for minimal shrinking of the vessel. Qingbai ware reached its peak from the 10th through 13th centuries, centered in the province of southeast Jiangxi in the town ofJingdezhen. In addition to the advances in chemistry that allowed the creation of thin-walled vessels, Qingbai is distinguished by its smooth, glassy glaze, achieved by using a small amount of iron in a reduction fired kiln. The result is the characteristic blue-green tinted finish. The local fabrics of the times lent themselves to the decoration of Qingbai vessels. Referencing the detailed design of the fabrics, potters achieved a great variety in their designs. Qingbai ware also borrowed and even improved on decoration from the Ding and Yaozhou wares. Minute detail and beading accent the outside rims of many vessels. In the early 14th century the Jingdezhen potters created a sturdier ceramic body by adding more kaolin to the clay. This type of ceramic ware is referred to as luanbai (eggshell white) because of its opaque glaze. Luanbai ware was short lived but helped to establish a precedent for new mixtures of clay.

Qingbai initially appeared in the Northern Song period, from about 960 to 1127, and became a sought-after item in the Chinese market. It became even more popular during the Southern Song period, which lasted approximately from 1127 to 1279. It was also exported in quantity to China’s neighboring nations. Kilns used to make Qingbai ware have been unearthed in many of China's provinces, suggesting great popularity and widespread efforts to duplicate Qingbai throughout the realm. 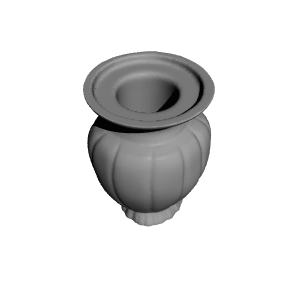 ×
0 collections where you can find Jingdezhen Jar at The British Museum, London by Scan The World