3D
360°
Featured Scan The World
2,267 views 399 downloads
3 collections
Community Prints Add your picture
Be the first to share a picture of this printed object
0 comments

This marble work, titled 'John the Baptist', is a work by Andrea Bregno (1418-1503). John the Baptist was a Hebrew itinerant preacher in the early 1st Century AD. John the Baptist is revered as a major religious figure, being called a propet by Christianity, Islam and Baha'i Faith.

The high-relief is of a very similar style to another sculpture in The SMK's collection depicting The Holy Hieronymus (DEP36). An extremely similar version of the Holy Hieronymus by the same artist can be found at The Tabernacle of Alexander VI in the Sacrisity of Rome, S. Maria del Popolo (1473); the relief of John the Baptist is also virtually identical to the sculpture of the same name at the Piccolomini altar in the Cathedral of Siena (1481-85).

The auction catalogue to where this work originates lists this and DEP36 as being part of a tombstone, and according to G. Carlo Sciolla in Arte Lombarda, XV, 1970, pp. 52 et seq. (Fig 2) in connection with the mention of Cardinal da Cusa's tomb in Rome, S. Pietro in Vincoli, considered the earliest work of the artist in Rome. 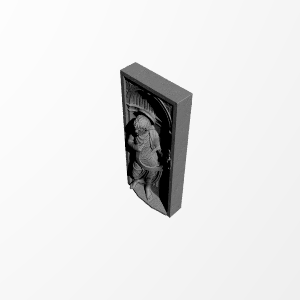