3D
Scan The World
6,012 views 195 downloads
Community Prints Add your picture
Be the first to share a picture of this printed object
0 comments

×
See your Inbox
×
×
Click & Print preview
4 0 Add to Collection
Description
John Wesley was an Anglican divine and theologian who, with his brother Charles Wesley and fellow cleric George Whitefield, is credited with the foundation of the evangelical movement known as Methodism. His work and writings also played a leading role in the development of the Holiness movement and Pentecostalism. This larger than life bust was sculpted in the 19th Century and is on permanent display at The Collection gallery in Lincoln, UK.
This object is part of "Scan The World". Scan the World is a non-profit initiative introduced by MyMiniFactory, through which we are creating a digital archive of fully 3D printable sculptures, artworks and landmarks from across the globe for the public to access for free. Scan the World is an open source, community effort, if you have interesting items around you and would like to contribute, email stw@myminifactory.com to find out how you can help.
Show more Show less
License
Printing Details 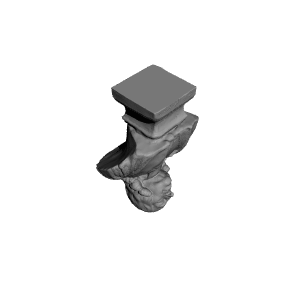 ×
0 collections where you can find John Wesley Bust at The Collection, Lincoln, UK by Threedscans