3D
Scan The World
3,187 views 122 downloads
Community Prints Add your picture
Be the first to share a picture of this printed object
0 comments

From the sixteenth century , the kings of France were given in ancient Italian diplomatic gifts . In 1604 , Henri IV brings together most of the first set in the hall of the Louvre Antiques . Colbert and Louvois , undertook to increase the royal collection for Louis XIV . Some marbles were obtained difficult in Italy. Fortunately it adds antique offered by their French owners or obtained through diplomats in the eastern Mediterranean . The ancient royal residences are entered with the Crown Property in 1792 , to be exhibited at the Louvre .

From the former royal collection in 1810 , this figure shows the type called " of Chastity ," often used by the Romans for female funerary portraits. Ears of wheat evoke here Ceres, the aspect which comes this young woman . If her features did not match those of Julie , the daughter of Emperor Augustus , despite its identification in the nineteenth century , it is perhaps a princess of the imperial house identified with the goddess of fertility . 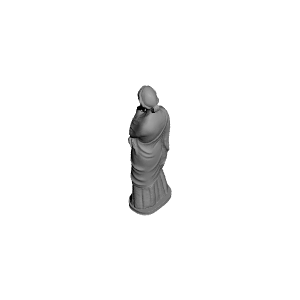 ×
0 collections where you can find Julie en Ceres at The Louvre, Paris by Scan The World