Jupiter at the Louvre, Lens

3D
Scan The World
5,605 views 640 downloads
6 collections
Community Prints Add your picture
Be the first to share a picture of this printed object
0 comments

Jupiter at the Louvre, Lens

The Greek gods were often depicted in various heroic representations when being the subject in sculpture. The majority of the time these depictions were taken from tales and written extracts from philosophers, plays and books; the most common being of Venus, the majority of which you can find on Scan The World and MyMiniFactory.

The style of the figures would often differ dependant on the age and style that they were made, especially if there was someone of high social status who would want to be depicted in the style of the god (see Marie-Adelaide de Savoir) who were adorned with figures that would attribute the Gods, two main examples that can be found in the Louvre are two sculptures commissioned from the Monarchy of Louis XV as Jupiter and Marie Leszczynska as Juno, available on MyMiniFactory and Scan The World.

This marble sculpture of Zeus is on permanent display in The Louvre in Lens, France. He is depicted in a typical way of raising his hand holding a lightning bolt accompanied by his Eagle that he'd often manifest as. 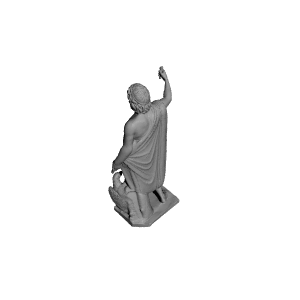 ×
6 collections where you can find Jupiter at the Louvre, Lens by Scan The World