Jupiter of Versailles at The Louvre, Paris, France

3D
Scan The World
3,392 views 213 downloads
1 collection
Community Prints Add your picture
Be the first to share a picture of this printed object
0 comments

Jupiter of Versailles at The Louvre, Paris, France

Colossal bust of Zeus known as "Jupiter of Versailles". Found in 1525 near the Porta del Popolo in Rome. Given in 1623 to Louis XIV, who asked Jacques Drouilly to transform it into a herm pillar. It is made of marble in roughly 2nd century AD, but the artist is unknown. 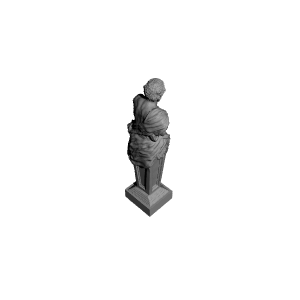 ×
1 collections where you can find Jupiter of Versailles at The Louvre, Paris, France by Scan The World