3D
360°
Scan The World
3,069 views 295 downloads
3 collections
Community Prints Add your picture
Be the first to share a picture of this printed object
0 comments

The Kai Yuan Tong Bao was the most extensively produced and widely used coin during the 300-year reign of the Tang dynasty in China. Strict government regulation of the minting process resulted in standardized alloys (the combination of metals that make up the coin) and a consistent, recognizable style.

The Tang dynasty was connected to Central Asia and its multitude of peoples and cultures by the interconnected trade routes of the Silk Road. One Central Asian group, the Turgesh, minted many bronze coins in the style of the widespread Tang dynasty coins, copying the square cut-out in the middle. The Turgesh king, known as a khagan , often had his tamga (emblem) stamped onto the coin. Along with the presence of the Uighur language (instead of Chinese) this differentiated the Turgesh coins from their Chinese prototypes. Although the Turgesh dynasty ended in the eighth century, these coins continued to be minted until the tenth, gradually becoming less refined in their inscriptions and decoration over time. 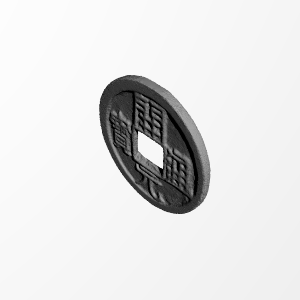