3D
Scan The World
4,517 views 285 downloads
1 collection
Community Prints Add your picture
Be the first to share a picture of this printed object
0 comments

The figure can be identified as Hermes, patron god of the gymnasium, because it is very like another version (also on MyMiniFactory), where Hermes wears his usual winged sandals and kerykeion (magic wand). The young man stands in a relaxed, confident pose, his powerful physique bleinding the perfection of a young, toned athlete with an idealised image of a god. Many different versions of this statue survive from locations right across the Mediterranean, showing how popular the type was in ancient times. This statue, once at Kew Gardens in England, is on display for the first time in over 50 years after being reconstructed and conserved at the British Museum. It had been restored when first iscovered, as was the normal practice from the Renaissance to the 18th Century, and given new arms and a left leg. How the statue came to be a Kew Gardens remains uncertain. The base on which the statue stands is an ancient altar, dating to about 300-100 BC, decorated with garlands and bulls' skulls. 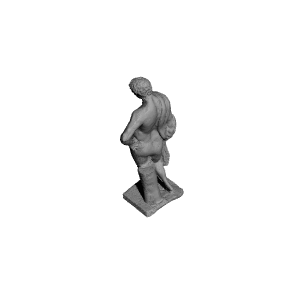 ×
1 collections where you can find Kew Gardens Hermes at The British Museum, London by Scan The World