3D
Featured Scan The World
3,771 views 219 downloads
1 collection
Community Prints Add your picture
Be the first to share a picture of this printed object
0 comments

There have been various attempts to reconstruct the face of Scotland's most famous King (Robert the Bruce, 1274-1329). This bust was made in 1966 by Charles d'Orville Pilkington Jackson (1887-1973) and shows Bruce in later life. This reconstruction is based on the cast of Bruce's skull, which is also on display (and on Scan the World) 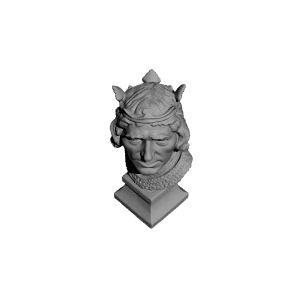