3D
Scan The World
2,059 views 113 downloads
Community Prints Add your picture
Be the first to share a picture of this printed object
0 comments

The Shitennō as seen here is one of the Four Heavenly Kings, these figures are positioned at the four corners of Japanese Buddhist altars, each watching over a different cardinal direction. As deities, they protect from evil spirits – psychological states that go against the Buddha and his message of freedom from suffering.  The examples displayed here were likely intended for the altar of a smaller worship space, rather than that of a large temple. The Shitennō are usually portrayed dressed in armor, carrying symbolic weapons or objects, and standing on a demonic figure - signifying their dominance over enemies of Buddhism. 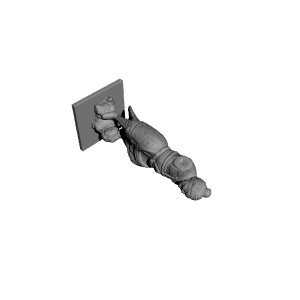 ×
0 collections where you can find King Tenno at the Guimet museum, Paris by Scan The World