3D
Scan The World
2,249 views 70 downloads
3 collections
Community Prints Add your picture
Be the first to share a picture of this printed object
0 comments

These limestone lions were found by Sir Flinders Petrie, the first Edwards Professor of Egyptology at University College London, in the Great Temple of Min and Isis at Koptos, in Upper Egypt, in 1894. The lions were acquired in a fragmentary condition by Sir Henry Wellcome in 1927, in return for a contribution to the work of the British School of Archaeology in Egypt.
They stayed in the stores of the Wellcome Historical Medical Collection until 1980 when they were re-discovered by Barbara Adams, the Research Curator of the Petrie Museum, and the Wellcome trustees generously gave them to College.

The masterly reconstruction is the work of the conservator, Richard Jaeschke. The bodies are built around bricks with plaster reconstruction made possible by accurate copying from the original fragments of limestone. The surface of the limestone is now pitted and worn, but was once polished and possibly painted.

Petrie discovered the lions on the basal clay below the level of the stairway to the Ptolemaic temple at Koptos and another smaller lion, now in the Ashmolean Museum, Oxford, was also found in the temple area.

Stylistically, the lions can be dated to the Early Dynastic period, probably to the first part of the First Dynasty (3100-2890BC), because of the open mouths with teeth bared and the position of the tail curved over the back. They are therefore two of the few early stone lion sculptures known from Egypt and certainly the largest, each measuring 1.40m in lenght. 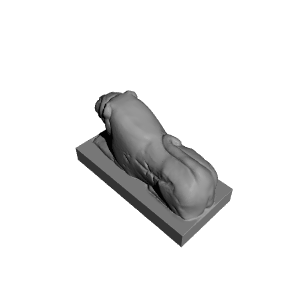