To all God of War fans out there..

I give you Kratos!

God of War is a third-person action-adventure game developed by Santa Monica Studio and published by Sony Interactive Entertainment . Released on April 20, 2018, for the PlayStation 4  console, it is the eighth installment in the God of War series, the eighth chronologically, and the sequel to 2010's God of War III. Unlike previous games, which were loosely based on Greek mythology, this game is loosely based on Norse mythology. The main protagonists are Kratos, the former Greek God of War, and his young son Atreus. Following the death of Kratos' second wife and Atreus' mother, they journey to fulfill her promise and spread her ashes at the highest peak of the nine realms. Kratos keeps his troubled past a secret from Atreus, who is unaware of his true divine nature. Along their journey, they encounter monsters and gods of the Norse world. 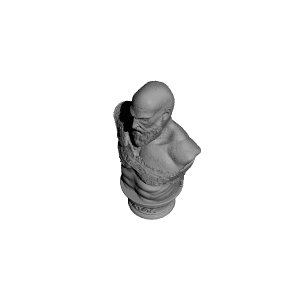 Just incredible print :) thank you for this beautiful model !

- 150 m/s on an Anet A2+ - 0.1 mm layer height - Meshmixer custom supports (had a little failure with one of them but still printed pretty well in spite of it)

Our casting to real bronze. Thank you for nice 3D model.