3D
3,700 views 213 downloads
2 collections
Community Prints Add your picture
Be the first to share a picture of this printed object
0 comments

Whilst watching the extended trailer for "Crisis on Earth-X" the 4 show, 2 night crossover event for the CW's superhero show, I noticed that Oliver, the Green Arrow shot an arrow that shed a casing to reveal what appeared to be a Kryptonite arrowhead.

So with a screen grab in hand, a few arrows of my own, some callipers and a copy of Fusion 360, I set out to design a version of this arrow as best I could.

I am not a designer, aside from this, I have only ever designed very simple stuff in Fusion 360, and this was by far the most challenging, but I did it.

My Idea for this is to be printed with my Translucent Green PETG from Real Filaments, I chose PETG over PLA for a few reasons.

1) Layer adhesion is better on PETG

2) I have had better experiences with impact resistance.

3) I haven't found any PLA's with a translucent green that I like as much as this PETG.

I Haven't gotten around to printing this yet, I am without a printer for a week or two whilst I wait for spare parts. But Ideally, as little infil as you can, to give the transparency effect as much of a chance as possible. So for my own printer (when it's fixed) I'm going to be printing 2 versions of this, a Draft print at 200 microns and 0% infil, and a 100 micron 0% version and 3 perimeters.

I'll update this post with Photos once I am able to print it.

*UPDATE a friend of mine was able to print this in translucent Green PLA, and it looks pretty damn awesome If I do say so myself.*

Print with as little infill as you can to get the transparency effect correct, of course, it depends on what material you are using. I would go with 0% infil and one more perimeter than you would usually use.

due to the narrowness and height of this print, I would recommend printing with a brim, a Skirt if you're feeling dangerous, and a raft if you don't like the Idea of a brim. 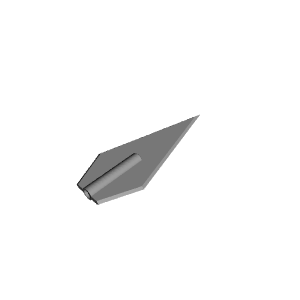