‘La Nature Se Dévoliant Devant La Science’ - nature revealing herself before Science; a very fine multipatinated bronze figure with varied gilt highlights and green tinted Scarab Beatle by Louis-Ernest Barrias (1874 – 1905), cast by Susses Freres. This important bronze figure is a finely cast example of Barrias's most celebrated work, a homage to advances made in scientific exploration and a masterpiece of early Art Nouveau. The figure depicts a young woman, the allegory of Nature, removing her veil to reveal her face and bare breasts to the cold gaze of science. The figure first appeared in white marble at the Paris Salon of 1893 with the longer title of 'La Nature mystérieuse et voilée se découvre devant la Science’ in its fully nude form. Suitably it was purchased by the medical faculty at l'Ecole de Médecine in Bordeaux. Barrias returned to the theme a few years later exhibiting a related sculpture at the 1899 Salon, simply titled ‘La Nature se dévoilant'. Following in the spirit of pioneers of polychromy such as CharlesHenri-Joseph Cordier and Eugène Cornu this figure was carved using expensive and luxurious materials such as Algerian onyx for the drapery, lapis lazuli for the ribbon and malachite for the scarab. This figure is now in the collection of the Musée d’Orsay. The first bronze casts were exhibited by Susse Frères, in various sizes and to great critical acclaim, at the 1900 Exposition Universelle. Awarded a prestigious Grand Prix at the Liège Exhibition of 1905, the renowned bronzier Théodore Millet deemed the bronze figure a ‘tour de force’ for the Susse firm and proclaimed it 'the finest of the works exhibited'.

The Scarab Beatle pinning the folds of the drapery, beneath the exposed bosom of the figure, acts as a signifier to the Egyptian origin of the representation and alludes perhaps to a more complex symbolism of death and resurrection and the contradictory character of nature itself. Perhaps it is a subtle warning that natures secrets maybe revealed, but at a cost. There have always been two contradictory approaches to understanding nature and as Heraclitus pronounced Phusis kruptesthai philei – ‘Nature loves to hide’. The philosopher Pierre Hadot in his book ‘The Veil of Isis: An Essay on the History of the Idea of Nature’, identifies the two approaches to nature as the Promethian, which through scientific investigation and discovery attempts to dominate nature and forcibly remove her veil, and the Orphic or poetic approach which seeks a unity with nature and views her divestment as a vulgar and uncivilised act.

Louis-Ernest Barrias (1841 – 1905) was one of the most celebrated and influential sculptors of the late nineteenth century. Along with contemporaries such as Frédéric Auguste Bartholdi (of Statue of Liberty fame), Barrias was influential in re-inventing a new sophisticated approach to allegorical representation. This refined approach is evident in the romantic figure of Nature Revealing Herself, but also in the handling of themes of modernity such as his Allegory to Electricity for the Gallery of Machines at the 1889 Exposition Universelle. Born in Paris into a family of well known artists, LouisErnest started his career as a painter studying under Léon Cogniet. He later took up sculpture studying under Pierre-Jules Cavelier and following his admittance to the École des Beaux-Arts in 1858, François Jouffroy. In 1865 Barrias won the Prix de Rome and was involved in the decoration of the Paris Opéra and the Hôtel de la Païva in the Champs-Élysées. 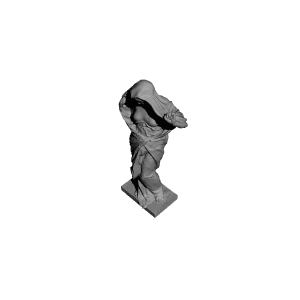 I turned this statue into a relief, and joined it to set of lego like bricks.