3D
Scan The World
3,477 views 356 downloads
1 collection
Community Prints Add your picture
Be the first to share a picture of this printed object
0 comments

This sculpture in bronze of Aristide Maillol represents La Nuit.

The sculpture depicts a female nude sitting, legs bent, arms resting on knees and head on hope. The sculpture has been installed since 1964 in the garden of the Carrousel in the Tuileries, in the 1st arrondissement of Paris. It is part of a group of statues of Maillol exposed in the open air.
Also known as the Place du Carrousell, this part of the garden used to be enclosed by the two wings of the Louvre and by the Tuileries Palace. In the 18th century it was used as a parade ground for cavalry and other festivities. The central feature is the Arc de triomphe du Carrousel, built to celebrate the victories of Napoleon, with bas-relief sculptures of his battles by Jean Joseph Espercieux. The garden was remade in 1995 to showcase a collection of twenty-one statues by Aristide Milllol which had been put in the Tuileries in 1964. 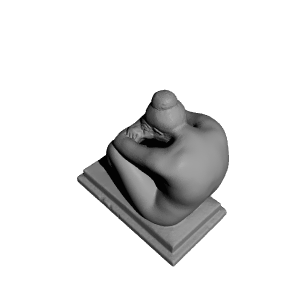