3D
Scan The World
3,089 views 233 downloads
2 collections
Community Prints Add your picture
Be the first to share a picture of this printed object
0 comments

This sculpture entitled "La Seine et La Marne" is located in the Tuileries Gardens in Paris and was made by Nicolas Cousteau (1658-1733). There are many sculptures in France with representations of important rivers by human figures...and this work celebrates France's two major rivers, the Seine and the Marne. The work depicts a man and woman seated as if on a love couch. Both figures are nude but for strategically placed robes. The female figure rests her left arm on the man's left thigh. Both figures look in the distance in opposite directions. The bearded man rests an object (a paddle or an instrument) against his leg. Two children are set near each of the adults, with the one next to the woman missing some extremities. 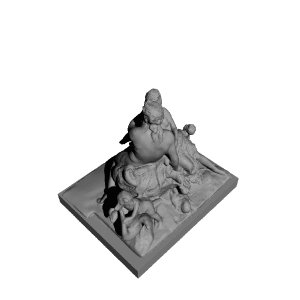