3D
Scan The World
3,143 views 140 downloads
1 collection
Community Prints Add your picture
Be the first to share a picture of this printed object
0 comments

This marble bust by Samuel Joseph (1791-1850) depicts Lady Belhaven and Stenton. Joseph was a founding memeber of the Royal Scottish Academy in 1826 and made this bust shortly afterwards. Although he exhibited for many ears, he never achieved the recognition or commissions he arguably deserved, and died almost penniless. His sitter here was born Hamilton Campbell in about 1790 and married Lord Belhaven and Stenton in 1815. The sculpture was signed and sated 1827 and is now on permanent display at The Victoria and Albert Museum in London, bequeathed by Rupert Gunnis.

Hamilton Campbell (about 1790-1873) became Lady Belhaven and Stenton through her marriage in 1815 to Sir Robert Montgomery Hamilton, 8th Lord Belhaven and Stenton. A marble bust of her husband by Joseph is also in the Museum's collection (inv.no. A.67-1965). Samuel Joseph (1791-1850) was one of the founding members of the Royal Scottish Academy in 1826, and exhibited there from 1827 until 1844. He worked in London as well as Edinburgh. He specialised in portrait busts, but also executed funerary monuments, such as the one to William Wilberforce in Westminster Abbey. However, he never achieved the recognition or commissions he arguably deserved, and died almost penniless. 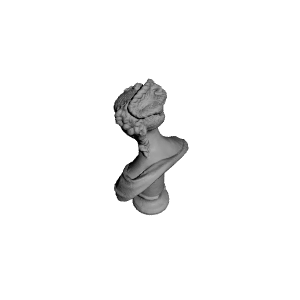