Later Kouros from Actium at The Louvre, Paris

3D
Scan The World
3,126 views 110 downloads
Community Prints Add your picture
Be the first to share a picture of this printed object
0 comments

Later Kouros from Actium at The Louvre, Paris

Attribution of this kouros to a precise atelier, workshop or artist is not defined. Certain specialists have hypothesized extensiveley that the piece is a production from Naxos, though others argue that it is a Corinthian artist or someone under the influence of Corinthian style.

This is the more stylistically advanced of the two kouroi found in Actium (the other can be found here), most obviously seen in the torso which exhibits well-modelled though very simple forms. The front is delineated by a series of ridges and grooves: horizontal clavicles, a shallow by clear median line descending from the sternum to the navel and a distinctly marked arch separating the thorax from the abdomen. The overall proportions are long and slender. The hair is massed softly over the shoulders, then gathered loosely behind with a double band of ribbon. Below the ribbon it falls nearly in a narrow spread almost to the middle of the neck. All the hair is carefully rendered in a beaded style.

Like the kouroi from Sounion and the Ptoon Sanctuary in Boeotia, the Actium youths are closely linked with Apollo since they apparently come from his sanctuary.

The sculpture was found by Champoiseau, a French consul to Ioannina in 1867 alongside another kouros.

Easy print, a pair of supports is needed. Printed by garagedays3d.com Printing Services. 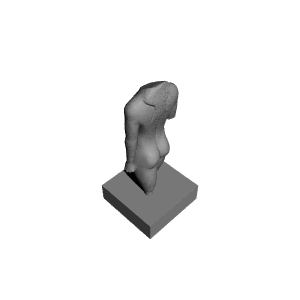 ×
0 collections where you can find Later Kouros from Actium at The Louvre, Paris by Scan The World