3D
Scan The World
2,795 views 121 downloads
Community Prints Add your picture
Be the first to share a picture of this printed object
0 comments

Laura de Noves (1310–1348) was the wife of Count Hugues de Sade (ancestor of Marquis de Sade). She could be the Laura that the Humanist poet Francesco Petrarch wrote about extensively; however, she has never been positively identified as such. Laura had a great influence on Petrarch's life and lyrics. The historical information on Laura is meager at best.

Born six years after Petrarch in 1310 in Avignon, she was the daughter of a knight, Audibert de Noves and his wife Ermessenda. She married at the age of 15 on 16 January 1325. Petrarch saw her for the first time two years later on 6 April (Good Friday) in 1327 at Easter mass in the church of Sainte-Claire d'Avignon.

Not much is known about her other than she did have a large family, was a virtuous wife, and died in 1348. Since this first encounter with Laura, Petrarch spent the next three years in Avignon singing his purely platonic love and haunting Laura in church and on her walks. After this Petrarch left Avignon and went to Lombez (a French department of Gers) where he held a canonry gifted by Pope Benedict XII. Her possible tomb could have been discovered by the French poet Maurice Scève in 1533.

In 1337 he returned to Avignon and bought a small estate at Vaucluse to be near his dear Laura. Here, for the next three years, he wrote numerous sonnets in her praise. Petrarch's Canzoniere (Songbook) is the lyrics to her in the troubadour tradition of courtly love. They advanced the growth of Italian as a literary language. They also popularized this form of sonnet that is called Petrarchan sonnet. Years after her death Petrarch wrote his Trionfi, which is a religious allegory in which Laura is idealized. 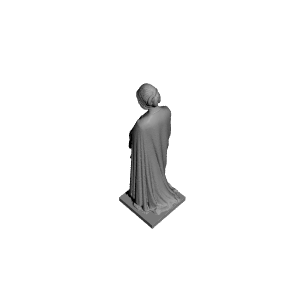 ×
0 collections where you can find Laura de Noves at The Jardin du Luxembourg, Paris by Scan The World